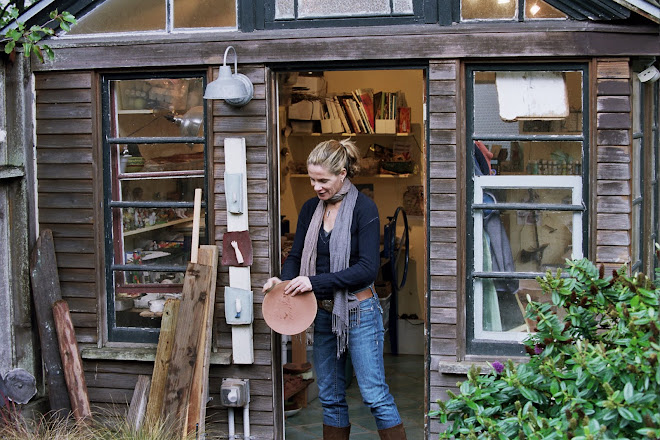 The man, the stick and the bags.. 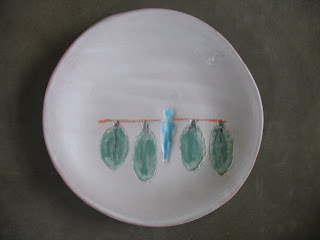 I go for runs out at the beach several times a week and often see sites that are fascinating--the red tailed hawk that often lands right in front of me as if to start a conversation, the blackbird that I help to get a drink from the water fountains and many interesting people going about their lives out at an urban beach outpost.
I imagine that life in the "old world" is one of small pleasures along with small struggles--some of which come with you to the "new world". Many people earn their living collecting cans and bottles--a rough way to be sure, although it is democratic and accessible. But you need endurance and some swift tricks most likely brought over from a place of origin far away. This man--probably well into his 80's, is a regular fixture shuffling out along the Great Highway--long spindly stick straddling his hunched shoulders with sometimes 4 jumbo garbage bags hanging off each side---filled to the max with cans and plastic bottles collected from the remains of the weekend coastal revelers. 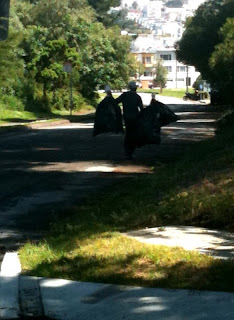 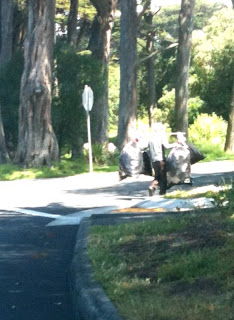 A long holiday weekend like this one must yield quite the bounty.
I nod to him as I run by--but think about this image often--his strength and  determination is inspiring and
also a reminder of the world we live in now--the gritty-ness and the quest to survive in all of us. 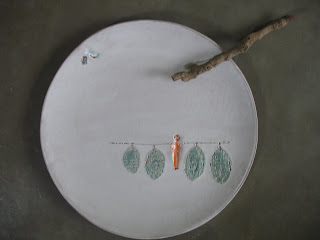 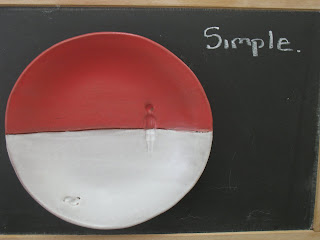 It's always fun for me to do commissioned work--usually involving full place settings for someone's treasured dining possibilities. And so to speak, everyone brings something new to the table for this task. Some want very specific designs that they have admired on my website and others say--whatever you want to do. Recently I have been getting some requests for minimal. Perhaps it is the state of the world and life being so complicated--people want to breathe a little, feel airy, light and unfettered. SO I had fun creating a whole line of work that was minimal in design and color- Sometimes I find that it is harder for me to leave a plate with just one little icon on it but rather will take to covering the whole thing in a frenzy. This may be speaking to my hoarding and collecting sensibilities--it is NEVER enough I say!  so it was with a very zen mind and spirit that I took to the clay in a spare way..and I really enjoyed it too.
Inspired by this and also the raw graphic nature of vintage dutch ceramics--I am introducing this simpleline...and am calling it simpleline..got it? 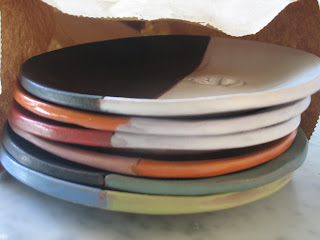 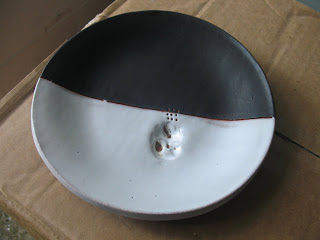 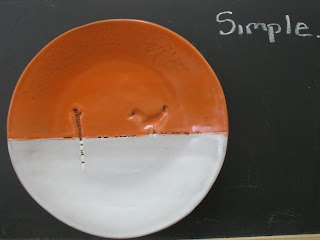 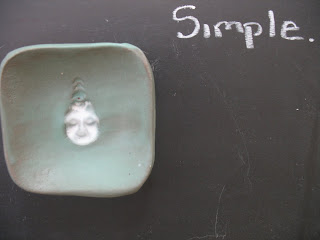 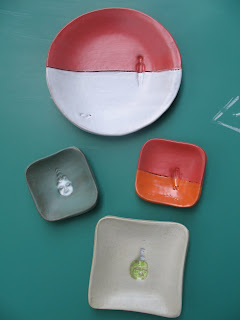 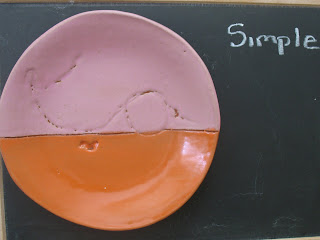 These are available now direct from me--drop me a e-mail if you are interested:
lisa@lneimeth.com 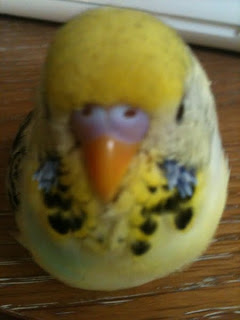 and then there's Kiki's beak too..
Posted by Lisa Neimeth at 9:54 PM

STAY TUNED! Revamping the website... in the meantime- follow on instagram: @lisaneimethceramics for most up to date work and news..
I was so thrilled to be included in the beautiful Where Women Create's Winter 2016 issue. Beautiful photos of the studio and my workspace along with many other sacred spaces of creative women.
For those of you inclined..follow me on facebook and twitter and instagram (@lisaneimethceramics) for the most up to date studio news, announcements and more images.
Take a listen to the wonderful Potters Cast from Paul Blais--a tremendous resource for ceramicists and artists alike. I recently had the pleasure of being interviewed and you can listen to that here.
Makers Market produced a lovely video of the studio and a bit of my process. Want to see the coop in action? Check it out here.
Studio featured in the "My Space" column of the dec/jan 2015 House Beautiful issue!
Sundance is celebrating their 25th anniversary with a curated collection to commemorate the occasion. I was honored to be a part of their celebration and created a special collection..check it out at Sundance as well as many new pieces now available.
Chinoiserie blue and white line as featured in House Beautiful..made to order and available now..email me for ordering information...and for stores carrying now as well as chinoiserie featured in other color ways.
Interested in ordering or getting more information on the tableware? Feel free to contact me or come by the studio if you're in the Bay Area..
Are you a store or restaurant interested in handmade tableware? email me for wholesale information..
Visit my website or contact me for the latest stores carrying my work around the country- Alabama, Philadelphia, Denver, Atlanta, New Orleans, New York City, Scottsdale, Virginia, Santa Barbara- just some of the new places.